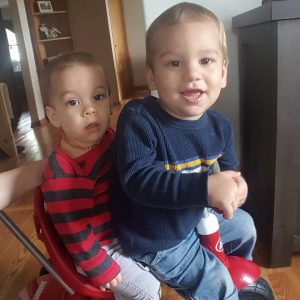 Our adorable grandsons came to visit this past weekend and it was wonderful. There’s really nothing better than seeing their smiles, giggles, excitement, and experiencing their love. All that wonderfulness has to be accompanied by some growing moments as well, of course, and this weekend, we experienced some of those with our little guy, Jamey. He just turned two and has definitely taken a temporary turn in his sweet little personality. Last time he was here, he loved to say, “good” and “sure” (both positive words). His new favorite word this visit was, “no” and it was accompanied by a few episodes of arched-back crying in defiance or even a time of fall-on-the-floor in full tantrum mode. It’s pretty safe to say that the “Terrible Twos” have arrived. I’ve always hated labeling kids’ behaviors because I don’t like those labels to produce an apathy toward the behavior and make us as parents think it can’t be improved or modified, thus giving the behavior an excuse to remain. Nevertheless, labels can help us to understand what is going on in a situation and help parents to be comforted by the reality that they’re not the only ones going through this learning curve season of life.

For my daughter, I think she’s glad to know about the label of “Terrible Twos” because it helps her to realize that she hasn’t done something wrong in her parenting even though he is suddenly acting worse than he had been behaving. She is handling this time so well. One thing she does when he is being a little defiant is to take his two hands in her two hands and she gets nose to nose with him and whispers for just the two of them to hear. Sometimes she says, “take a deep breath.” Other times she might tell him he can’t hit or take a toy from his little brother or whatever stubborn issue is at hand. And sometimes she adds a required action, such, “now you go give the toy back to Asher.” This is a great option when it’s a mild problem before it escalates to a full out temper tantrum. In fact, stepping in at an early point (when you recognize a bad attitude setting in for the day) lets the child know that you’re not going to be caving in to whatever bad behavior he wants to choose, and thus, it can curtail a worse behavior because he knows it won’t be tolerated.

The “terrible twos” don’t always happen at two years of age. For some kids, it begins around 18 months and for others it might not come until age three, but parents definitely know when it has arrived! Little Sweetheart is suddenly acting like Little Stinker. How well Mom and Dad have done at character training prior to this new season will certainly impact how bad and how long the season is, and of course the child’s temperament also affects this. Here’s the big question, though, “What do we do about the tantrums?”

1. Most importantly, do NOT reward the tantrum by giving the child what he wants. If you reward the behavior it WILL be REPEATED. So, do nothing or do the opposite of what they want, but whatever you do, don’t give them what they want when they’re in a tantrum.

When my oldest daughter, Tori, was in college, she worked for a preschool for a few years in the two-year-old classroom. She experienced many children who were used to being given what they want if they would throw a fit to their parents. They would try this with her as well, but she knew not to give in to their fit. After a couple times of trying out a tantrum with her, they wouldn’t do it anymore because it wasn’t getting them the results they wanted. She taught them instead to use words, to ask nicely, and to thank her afterwards. They knew that she required kind behavior to get the results they wanted. Then their parents would come to pick them up and they’d go right back to their fitful attitudes because that is what had been rewarded by their parent. Those two-year-olds knew what behavior worked with each adult in their life.

2. Now for the part that is a bit more challenging, identify what is causing this behavior. Finding the cause will help you know how to deal with it best. In my book, Wearing All Your Hats Without Wearing Out, I talk about being a “barometer of your child” – learning to read the signs of their physical and emotional needs, recognizing when something is “off” from the typical attitude/behavior/character of your child. Being a “barometer of your child” can be the key to unlocking the deep places in your child’s heart. God has placed built-in warning signs of behavior that indicate underlying trouble and we need to be careful to deal with the root causes of behavior, not just responding to the surface actions in a child. Dealing with the root causes will produce much more effective results than simply parenting the symptoms. Be observant, dig deeper, and pray for God to give insight into your child’s needs. (For more on Root Parenting vs. Surface Parenting, click here.)

Let’s look at the common causes of tantrums in a toddler:

A. Mind of their own – Tantrums begin because the child is developing some autonomy. He’s learning that he has a will that is very different from Mom or Dad’s will. While this is natural and important for a child to develop their own thoughts and unique perspectives, it is imperative for everyone to know appropriate behavior and self-control. If we all threw fits every time we didn’t get our way, we would not be able to keep a job, keep a marriage, or keep a friend. Self-control is an essential part of a healthy society and a healthy individual, and it’s our job as parents to help our child to develop self-control.

B. Testing the parent – Another early cause of tantrums is that the child is testing to see if this tantrum behavior is an effective tool for getting what they want in a situation. Let’s say Jonny doesn’t want to stop playing with his toys when his mom says it’s time for dinner, so he throws himself on the floor wailing with all his might. If mom responds by saying, “okay, I guess you can play another five minutes,” then Mom has just sent the message that a tantrum is an effective behavior for getting what the child wants.

(One way to avoid this scenario, is to give a five-minute warning that play time will be ending soon, such as, “Jonny, in five minutes we will pick up toys and then have dinner.” If Jonny doesn’t want to do that, he may begin fussing right then, but don’t dialog with him at that time. Simply ignore the fussing or you are engaging him in a negotiation. There are better ways to deal with issues than negotiating with a two-year-old, but that is for a separate post).

C. Tantrum to manipulate – If your little person has been rewarded (gotten what they wanted) from throwing a tantrum in the past, then today’s tantrum may be another attempt to get what they want again. If your child has been throwing tantrums for months, then it is most likely that the tantrums are happening because they work in manipulating you to give in to what your child wants. To stop the tantrums, you will need to stop rewarding the behavior.

D. Physical Needs – Does your child’s tantrums or bad attitudes increase when she is hot, cold, hungry, thirsty, tired, teething, or doesn’t feel well in some other way? Stay on top of these physical needs as much as possible. And in times like these, avoid making demands so that you can avoid the tantrums as well. For example, let’s say that you’re at a friend’s house and so your toddler has missed her afternoon nap, making her much more vulnerable to outbursts, so avoid  big commands. Don’t ask her to pick up the toys today, as you normally would, for instance. Instead, just start picking up the toys and singing the “Clean Up” song but not actually asking her to clean up. If you’ve taught her this good habit in the past, she’ll probably join you in cleaning up. Yes, she should be in the habit of picking up her toys, but because you recognize the physical needs that are currently compromised, you know it is wiser to not put that requirement on her today.

Once you make a demand, you need to enforce it or your word isn’t worth much to your child.  So, only make demands that you and your child are capable of following through with the demand.  If physical needs are currently compromised in any given moment, then ask yourself, before making a demand, “Am I willing to enforce my demand and is my child capable of fulfilling it right now?”  The answer should be “yes” to both parts of that or don’t make the command at all.

E. Emotional Needs – Is there a new baby in the family, making your toddler feel insecure about her role in the family? Have you been too busy to give her some focused love and attention time today? A full heart produces more stable behavior and attitudes while a depleted heart can produce more bad behaviors. Toddlers need some focused love every hour, in my opinion. In fact, I used to set the timer for the top of every hour to give some one-on-one “Mommy and Me” time with my toddlers.

Also, if you’re not familiar with the book The Five Love Languages of Children by Gary Chapman, I highly encourage you to get this book and learn to give all five types of love to your children, no matter what their dominant love language might be.

In summary, there’s two important steps to dealing with tantrums: 1) Don’t reward the tantrum, and 2) Identify the root cause of the tantrum, which will mean some trial and error and giving your best guess, because this parenting thing is not a perfect science, but it is well worth the effort to become a student of your child.

Now, I must end where I began, back with my adorable grandson. Our little guy deserves to be gently led toward behavior that will bring blessing to his life and peace in his heart and home. Intentional parenting is a lot of work, but it produces a harvest of blessings that are indescribably awesome! Hang in there, mama of littles, for you are tending a garden of great worth.

If you’d like additional insight from Val on the topic of raising younger children, you may want to check out her book When Littles Are Loud: Maximizing the Moments without Drowning in Chaos, available in the shop.

Nurturing a Sense of Security in Marriage & Family - with Rich and Val, Episode 54